Hello everybody my name is Savet. I am 25 years old. I just got married and have one newborn son.   My parents have 8 children and I am number 7th among them. My parents are farmers and they are poor but they are working very hard to support all of us. They earned money by collecting the fruit and sent me to school and University. I feel very proud and grateful of them.

I finished University of Management and Economics in Battambang in 2013. I studied Human Resource Management.

I like to work in the community and help my country. So now I have just starting my tour business but my heart is still with my community therefore I hope that you’ll be inspired to help my program. 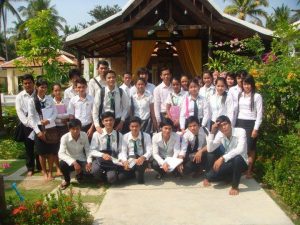 Everyone in the world has different life. So why? The answer is because we have different societies. Culture, economic, education and politics affect every aspect of our lives.

Cambodia has a very hard condition country because we had had the war all the times. During the Khmer Rough regime it was the terrible time for our people. Many people died because they got killed by the Khmer Rough. Khmer Rough killed all educated people because they believed that all of them will become their enemies in the future. So to build their society stronger they forced all people to work as farmers. As a result, during that regime was the worst history for our country; it was the wrong decision of the leader and our political condition was difficult, to say the least.

To make a country stronger and better – with better living conditions for the poor – there must be more educated people to build back society.

And I live in Cambodia’s society so I need to have a responsibility to help my country.  My goal is to create a successful business that grows together with my good society and supports local people. 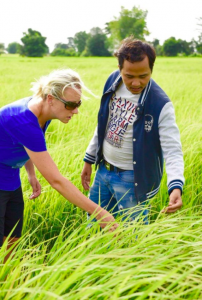 Authentic visit of the countryside with a passionate tour guide

Savet is really passionate about his job and gives you a great tour of the countryside, showing you the making of the rice wine, the rice paper, the banana chips, the dried mango paste and so much more. He will invite you to the house of his parents (old style) where you will have the chance to see how the locals live, cook and sleep.
He will also invite you to his home where you will share a delicious lunch prepared by his wife.
We ended the full day tour with the visit of the killing caves and adjacent temple & the departure of the thousands of bats from the cave at sunset.
Excellent day that I recommend.

We did the half day tour with Savet, where we rode the Bamboo train and visited the killing caves and bat cave.

Savet was a great tour guide, who was very knowledgable about each site we saw. He also taught us about the history of the Khmer and answered any questions we had

Savet was a very knowledgable and genuine guy, and would definitely recommend to others!

I have never participated in any kind of organised tour, but then I read about cycling experiences around Battambang and was immediately intrigued.
As I couldn’t decide which kind of tour would suit me best, I chose Battambang Countryside trip as this one seemed to combine all the other offers I found in one single full day trip. I contacted Savet about a week before, and it turned out that also his price is lower than others (depending on the number of persons).
So, once arrived in Battambang we settled the trip for two of us, a friend and myself, and spent an amazing day with Savet. I can’t add much more to the previous posts… I really enjoyed it all, with the village tour as my favourite part of the day, ad we got to know places you wouldn’t visit on your own, and had the opportunity to get in touch with local people (including Savet’s lovely family).

Amazing tour, interesting conversations and a true view into the Cambodian life!

We’ve done quite a few tours around Asia, and we have to say that this was one of our favorites (if not the favorite!).
Savet is a super friendly and informative person and we had very interesting conversations about Cambodian life, politics and concerns in Cambodia. Additionally, we visited the countryside and small local businesses with no pressure to buy anything.
If you’re in Battambang, this tour is the best way to spent a day and should definitely be part of your stay!
Thank you, Savet!

We’ve been on some great tours on our travels but Savet’s tour is just wonderful, not just for the places he takes you…yes the cycling around his village and meeting his wonderful family are amazing, as are the millions of bats flying out of the cave, the killing caves were very moving and emotional..these are highlights of the tour but the thing that makes this tour is the man himself Savet, such a genuinely nice, knowledgeable and friendly guide whom you could ask all manners of questions…if you’re in Battambang you NEED to do this tour you will not be disappointed…Thank you Savet for a most memorable day

This is a unique experience that you could regret not doing especially when it’s too late and this way of life has passed before the big push to commercialise everything has taken place.
Savet’s day tour was much more than a simple guided tour / day out. It’s like I got to know a little more about the reality of everyday life for a local Cambodian family and a deeper understanding of their culture. And most importantly I didn’t feel like I was intruding nor was I treated as an intruder . Savet is a lovely well spoken and generous guide offering you a personalised insight into the local businesses, his family and his primary school and community.
As all of his previous reviewers have said the day was fantastic but my memory will be of listening to Savet, meeting his family and understanding a little better the strength and beliefs of the Khmer people. A delight to spend time with him.